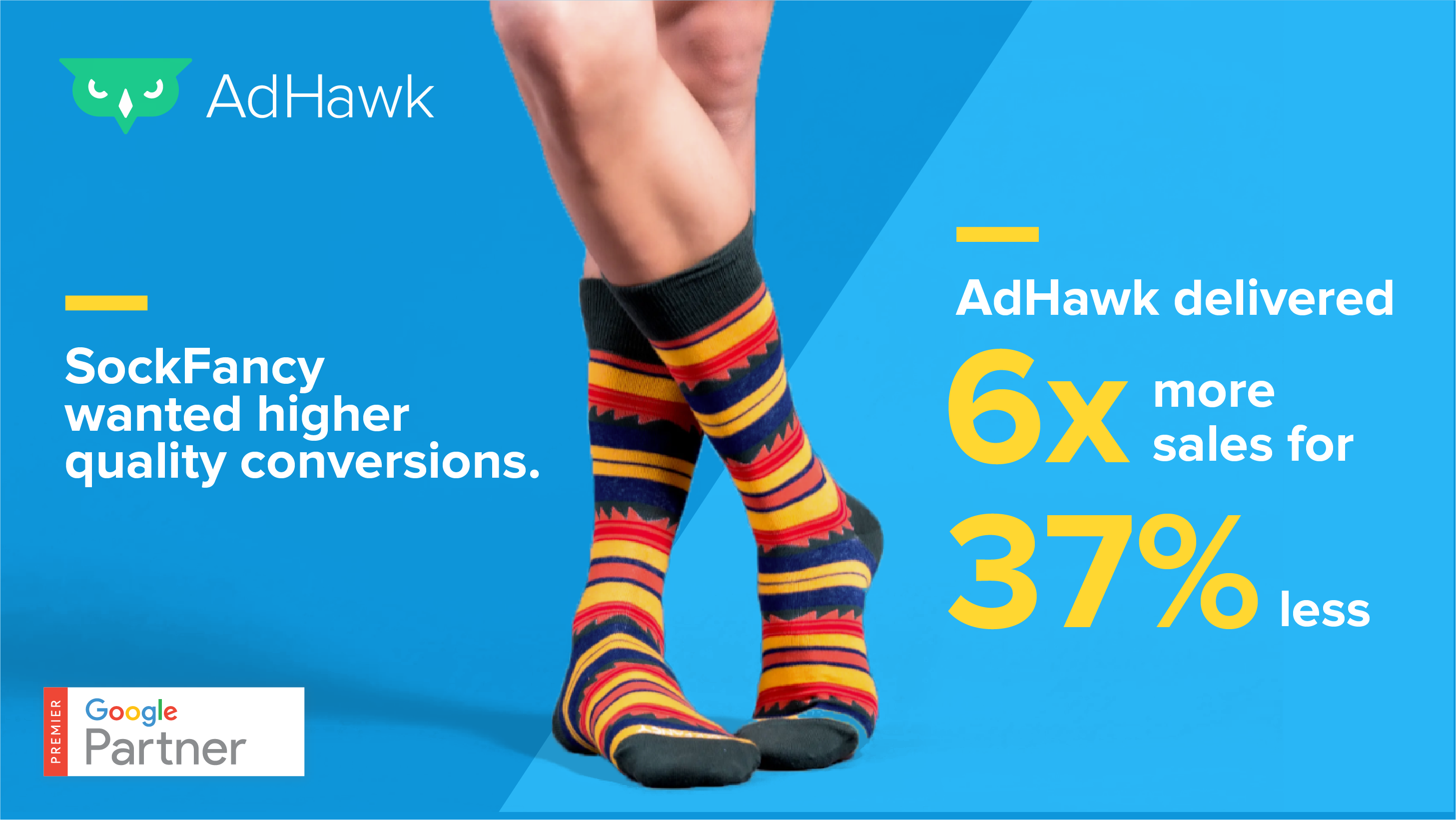 For every $3 of monthly discretionary income, $1 is spent online. With that statistic in mind, every e-commerce company should be leveraging their products online.

Sock Fancy recognized that, and knew that with the right tools, their business would thrive online.

When Stefan Lewinger started the subscription sock company in 2013, he ran into the problems that most e-commerce companies face with digital advertising.

“Early on, we were never short of ideas for content or places to spend money on advertising online,” he explains. “We recognized the importance of dedicating time and resources to channels like AdWords, but we struggled to truly optimize our campaigns and budget. It felt like solving a Rubik’s cube blindfolded that costs you money every time you guess wrong.”

This won’t come as a surprise to anyone who has tried to use Google AdWords or Facebook Ads. Each platform comes with its own complicated set of rules and dashboards. Stefan spent hours learning the nuances of each platform, but it still wasn’t enough. “We were leaving conversions on the table and no company likes to admit there is money being wasted,” he says.

It felt like solving a Rubik’s cube that charges you money every time you guess wrong, while blindfolded.

Stefan and his team at Sock Fancy agreed that they needed something to help them leverage the mountains of valuable data sitting in their accounts. So, they began their search for a tool that would help them solve the digital advertising puzzle. “I stumbled across AdHawk while looking for a solution on how best to address our AdWords optimization problem. When I read on AdHawk’s website that ‘Businesses Suck at Online Advertising’ I figured they had to be good at their craft to make a statement like that,” he says.

Getting up and running with AdHawk

One of Stefan’s early concerns with integrating software to help simplify Sock Fancy’s digital advertising efforts was the amount of work it would take to get everything up and running: “Based on my experience with past advertising companies, the onboarding process is never fun and certainly not easy. I was preparing myself for another cumbersome process.”

AdHawk’s aggregate API was designed to make integration seamless. After just a few minutes, Stefan and his team were on the AdHawk platform and ready to tackle the challenges they faced with their digital advertising campaigns. “I was impressed at how smooth and user-friendly it was to plug-in our different accounts. I’ve probably spent more time deciding which socks to wear in the morning,” he says.

We were surprised how quickly AdHawk delivered campaign advice. From bid adjustments to budget allocations, to keyword optimizations, it felt like we approved tips every day!

“We were surprised how quickly AdHawk delivered campaign advice. From bid adjustments to budget allocations, to keyword optimization, it felt like we approved tips every day! Within days, we started seeing our ad CPAs trending down and conversions trending up.”

Prior to working with AdHawk, Sock Fancy was battling the two most prominent issues facing young e-commerce companies’ digital advertising strategies: low conversion rates and high customer acquisition costs. After signing on with AdHawk, Sock Fancy’s monthly conversions increased by six times and their cost per acquisition was driven down by 27%.

Much more, for much less.

Struggling with Sock Fancy’s AdWords campaigns used to take hours out of Stefan’s day, but now takes just a couple of seconds. “My new morning routine now consists of coffee, checking the news, and approving my AdHawk recommendations,” Stefan says.

“Entrusting AdHawk with our online advertising has turned out to be one of the best decisions I’ve made this year. Not only do we get great feedback, but the savings we are realizing actually pays for the service itself.”

Get results like Sock Fancy. Enter your email for a free consultation!